I started a new hobby: pointing out vulnerabilities for a particular man-in-the-middle attack. It is described in CVE-2009-3555:

The TLS protocol, and the SSL protocol 3.0 and possibly earlier, as used in Microsoft Internet Information Services (IIS) 7.0, mod_ssl in the Apache HTTP Server 2.2.14 and earlier, OpenSSL before 0.9.8l, GnuTLS 2.8.5 and earlier, Mozilla Network Security Services (NSS) 3.12.4 and earlier, multiple Cisco products, and other products, does not properly associate renegotiation handshakes with an existing connection, which allows man-in-the-middle attackers to insert data into HTTPS sessions, and possibly other types of sessions protected by TLS or SSL, by sending an unauthenticated request that is processed retroactively by a server in a post-renegotiation context, related to a “plaintext injection” attack, aka the “Project Mogul” issue.

I bet I am not the only one practioning this activity, because the vulnerability was described in 2009. And the fix for this vulnerability has been around for quite some years too. After the releases of the various fixes for this vulnerability the quest for KAMITMA (Knights Against Man-In-The-Middle Attacks) began. It is easy to become a KAMITMA in the context of CVE-2009-3555. You just need to point out this vulnerability to the owner of TLS/SSL protected websites that are vulnerable, politely asking that they update their software. You might mention that this is an old vulnerability (2009 is like a century in computer development).

I started this hobby because I found my own website (and ownCloud and email) is vulnerable. I asked my hosting provider and they responded by offering moving to a ‘new’ hosting environment. New is not the newest version of Apache httpd, but I am planning to move to this new hosting environment soon. If that doesn’t fix this vulnerability, I’ll have to move and suggest others to do so too because it’d show my hosting provider doesn’t care about security.

The easiest way of spotting this vulnerability is to use Firefox and make it block connections that are made using the old vulnerable protocol. Open a tab in Firefox, enter about:config and press enter. Search for security.ssl.require_safe_negotiation and double-click the row to set it to true. The next time you try to visit a vulnerable website you’ll see this: 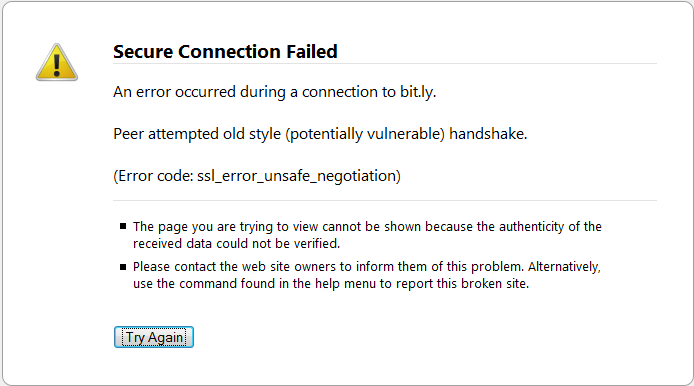 When you see this, it’s hobby time: send a message to the owner of the website asking to get updated and more secure.

I found these websites and try to keep this list updated when I find something changes:

Addition, 2014-08-28: Tweakers.net, a news website and price comparison website for electronics, hosts its images on a different domain (tweakimg.net and subdomain ic.tweakimg.net). Apparently, these are vulnerable because all color and layout is lost when I look at the Pricewatch. The browser console shows what is going on: